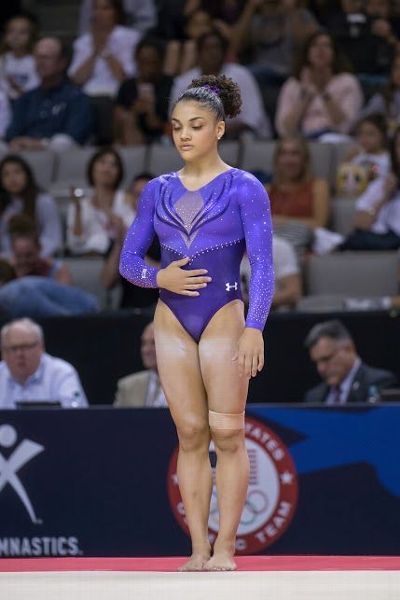 With one performance left on the biggest night of her career, Laurie Hernandez paused, placed her right hand over her belly and closed her eyes. She inhaled. Paused. Exhaled. She felt her belly expand and contract. She became aware of her breath. And slowly, the anxiety and adrenaline melted away. Then she raised that same arm toward the judges and turned to face the beam.

“I was really calm before beam,” Hernandez said. “I was able to calm myself down and go out there and enjoy the moment.” It’s a technique Hernandez learned from sports psychology coach Robert Andrews, who heads Houston’s Institute of Sports Performance and also works with three-time world champion Simone Biles. Watch Hernandez closely before she presents to the judges at each rotation and there she is: hand over belly, gaze softened yet focused, her shoulders rising and falling with each inhalation.
Laurie Hernandez’s pre-routine ritual includes this breathing exercise that calms her right before she goes.

Laurie Hernandez’s pre-routine ritual includes this breathing exercise that calms her right before she goes.

One of the wonderful things about my work in the world of Sports Performance is that I attend many different sporting events and witness amazing sports performances by athletes.

Sitting on the sixth row of the Birds Nest at the 2008 Olympics and watching Usain Bolt set a world record in the 100 meter dash was exhilarating. Equally thrilling was sitting in the National Indoor Stadium watching our mens gymnastics team win the bronze medal against all odds.

To perform at such a high level under so much pressure means that these athletes have been influenced in a very positive way by coaches, teammates, and parents.

I talk with athletes all day long and one of the most important things I hear from highly successful athletes is that they feel like their parents love them unconditionally, regardless of how they perform.

They know that if they step out of bounds at a key point in the meet, or sit down on a critical vault that their parents are going to be there for them in a very positive way.

Some great athletes have terrible relationships with their parents. But a strong bond between parent and athlete is a common theme I hear often.

Parents are always coming up to me in the stands and calling me and asking me questions about their childs performance or involvement in sports. I am always open to these conversations and consider this an honor. I am always forthright and very honest with these parents.

I see it as an opportunity to teach healthy ways to parent an athlete, and for me to become an advocate of the athlete themselves.

Most parents are open to my feedback. It makes a huge difference in the heart and mind of an athlete to have a parent who is willing to get on board with the philosophies we are addressing in our work together.

One of the most significant conversations I have had came at the Winter Cup meet in Las Vegas last February. I was talking with Sue Bhavsar, Raj Bhavsars mother. She asked, As a parent, what can I do to help Raj make his Olympic run this year? It was a very powerful conversation and if you know Rajs story you know that overcoming adversity and set back is at the heart of his journey to Olympic greatness and a bronze medal at the 2008 Olympics.

Parents Have an Effect – Positive or Negative

Having parents who were willing to step up and learn, adapt, and do whatever it took to help Raj become an Olympian made a huge difference for Raj.

Sadly, while sitting in the stands I also hear many comments from parents that make me want to stand up and say do you have any idea how you are influencing your childs performance, and their heart, mind and spirit?

As the father of a high school baseball player, and a young gymnast I have learned to read my childrens body language as a way of seeing how my words open them up, or cause them to shut down.

Many times parents are oblivious to their childrens body language when they are talking to them about performance.

I was at a meet and noticed this one girl performing extremely well. She was powerful, elegant, and graceful and received very good scores from the judges on bars and vault. She walked over to her mother between events and her mother said how did you get those scores bribe the judges? I was shocked by what I heard, and the reaction I saw in this young girl was heartbreaking. She was so proud in one moment and in the next completely deflated. She looked down, her shoulders hunched, embarrassed, but she laughed along with her mother.

She then went to beam and floor and had major falls on each event. When she came back over to her mother it was silent, but so much was being said in that silence.

I was talking with another parent and their gymnast son about performance issues. In front of their child they said high bar is my sons weakest event, he never does well on high bar. Again, I watched the body language of the athlete. He looked down, and away, and his face went from bright and engaged in our conversation to disconnected and ashamed. It looked like he had been hit in the stomach.

I said in a very strong voice, your son is an all rounder, and as an all rounder he doesnt have a weak event. He has an event he has to work harder on. I suggested that this gymnast work with his coach on high bar first when his physical energy and mental focus was at its highest.

He quickly became reengaged in our conversation and became animated, and excited. I had instilled hope in this kid and showed him a way to increase confidence. At the same time I was teaching the parent how to create a positive interaction with their son. He went on to have a great year, and became pretty good on high bar in the process.

One of the rules I have with my kids is that I dont say anything negative for the first thirty minutes after a practice, game, or meet. This creates time for them to process things on their own in a state that is mentally and emotionally open. It also gives me time to work through my irrational feelings about their performance. We talk about what they did that worked, where they had success, and what they learned. They usually talk a lot and at some point the conversation might turn to areas of concern or places where they might have struggled.

Again, I am attempting to create an atmosphere where they feel open, connected to me as a parent, and loved. From this place they are willing to learn, and open to feedback.

If I sat them down and drilled them about falling on beam or striking out I will see them shut down. They will become angry as a way to defend and protect themselves from my negative energy. The conversation, as well as our relationship will head south.

As parents we have to get our own agendas out of the way, and see what is best for our young athletes. Are you creating a positive space, an atmosphere of hope, and excitement for them to excel in their sport? Or are you suffocating them with your negativity?

In the long run our childrens well being and mental health is more important than whether or not they won a particular meet or not. I have found that more often than not performance increases when children feel the unconditional love and support they receive from you as a parent.

They will feel less negative pressure and stress, two of the most destructive factors to performance. And will gain confidence and build self esteem.

It is easy to be the critical, harsh, over bearing parent. It takes guts, and courage to learn a heart centered approach to parenting an athlete.

It will make sports more enjoyable for the entire family.