Every two years I am privileged to watch the greatest athletes in the world come together for the summer and winter Olympics. For me the stories of loss, overcoming injuries, and the strength and determination of the human spirit are the highlights of the Olympics.  The human side of performance is awe inspiring, and profoundly moving to me. Every Olympics has its own inspirational stories. Dan Jansen’s story of losing his sister to cancer hours before competition, falling, and finally winning a Gold medal after years of loss and frustration still moves me to the core. Raj Bhavsar and his “never give up” spirit helped him overcome two Olympic team rejections and win a Bronze medal in Beijing. Dan O’Brien faced Olympic disaster, stepped through his fear, and became an Olympic decathlon champion.

Last night I witnessed an Olympic moment that moved me profoundly, and inspired me to want to do greater things with my life. 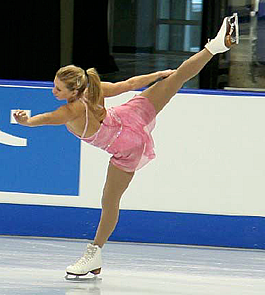 Joannie Rochette of Canada skated in the women’s figure skating short program less than forty eight hours after her mother, Therese died of a heart attack. Her mother passed away Sunday evening after arriving in Vancouver to watch her daughter skate for Canada in the Olympic Games.

Her performance was spectacular. The crowd at the Pacific Coliseum gave here a thunderous ovation before she started her program and were with her at every turn and toe loop of her routine.

I watched in amazement as she gracefully skated, jumped, and glided her way to a third place finish leading into Thursdays freestyle program.

It was when she finished her routine that I lost it. Joanie held her emotions in check for the entire routine and when she skated to a stop her grief exploded to the surface. Not just crying but sobbing and heaving from deep within her body. Her coach held her for moments as the crowd erupted into a prolonged celebration of her strength, courage, will, and determination. It was the perfect honoring of her mother and everything she has meant to Joannie and her life as a skater.

So why does this touch me so deeply? In my work with athletes we always talk about keeping focused, learning how to manage distractions and maintain ideal levels of pressure to perform at their best.

Athletes get worked up about college coaches being in the stands, having a big competition to attempt to make a team, making an out on their last at bat, dropping a pass, and many other sources of stress and pressure that affects their ability to maintain focus in competition. One gymnast I worked with got upset because little kids in their Mom and Me class walked by the apparatus she was training on and she got distracted.

Now lets put this in perspective. A kid drops a pass and it is the end of the world. A bunch of toddlers walk by and an athlete freaks out and loses focus. And Joannie Rochette skates the best program of her life less than forty eight hours after her mother dies and she is skating at the Olympics!

I have worked with Olympic athletes and a big part in preparing for the Olympic games is learning how to handle the pressure that comes with participation in the biggest sporting event in the world on the biggest stage the world of sports has to offer. The pressure in an Olympic venue is intense. You can feel it when you walk into the arena.

So if Olympic pressure is off the charts, how does an athlete like Joannie skate the routine of her life with all of the distractions going on around her? Her ability to manage her emotional shock, contain her sadness, sorrow, and grief that was trying to force its way to the surface, and maintain focus and composure was a moment of Olympic Glory that I will always remember. I am sure her story will be told during future Olympic broadcast.

I will find a copy of this story and show it to the athletes I work with to inspire them and show them that the human spirit can accomplish amazing things in the face of monstrous distractions and pressure.

I believe that Joannie transcended her ego, the part of our mind that measures pressure and expectation, and skated purely from her heart and her soul. She was able to step into a pure, clear, and centered place and allow her body to flow easily and effortlessly.

All of her past failures, mistakes, injuries and upsets faded away because she was skating from what I call a “centered” place. She was centered mentally, emotional, spiritually, and physically during her routine. She was able to let go and let her heart and soul show her body how to skate freely, gracefully, and effortlessly.

When she ended her skate she stepped out of this sacred space and into the deep and conscious realization that she has lost her Mother, the understanding of what has happened over the last two days, the power of knowing she was strong enough to contain the enormity of the event and grasp the magnitude of what had just happened on the ice.

Joannie showed strength, grace, dignity, humility, power, courage, and a tremendous ability to focus. These are all of the traits present when an athlete transcends the limits of the human body and reaches a peak level of performance. If you were to asked Joannie how her performance felt I am sure she would say ’surreal”.

It was a beautiful moment – a moment of true Olympic glory.