This past Sunday NFL players went down in droves suffering an alarming number of injuries.  The serious nature of each of these injuries is a hot topic on sports radio and television programs.  What is not being discussed is the psychological toll serious sports related injuries might have on these athletes.

All of these injuries are serious in nature.  Some might be career threatening or career ending.

It is well documented that athletes suffer intense physical pain when injured.  There is nothing pleasant about breaking bones and tearing ligaments and tendons.  What is not well documented or being discussed is the psychological pain and suffering athlete’s experience at the time of the injury and throughout the entire diagnostic, surgical, and recovery process.

There is a spectrum of severity with sports related injuries.  Mild injuries might require time off and therapy.  More serious injuries require surgery and rehab.  The most intense can be career threatening or career ending and can place the athlete’s future participation in sports in question.

Athletes on the more severe end of the spectrum have talked with me about how bad the injury was when it occured.  But in most cases the most painful experiences while injured are the key impact moments that occur after the injury.

These after injury memories are filled with intense mental imagery and powerful emotion.  The memory and image of being carried off the field strapped to a stretcher, the Doctors diagnosis in the locker room at halftime, a phone call getting the MRI results from the team Doctor, and receiving word that the injury will require surgery are mentally and emotionally overwhelming for some athletes.

When an athlete receives word that their career might be in jeopardy the impact of the injury and the shock wave of emotion can be traumatic. Sports injury trauma is taking a toll on athletes.

There is a lot on the line for an athlete who suffers a serious injury. These injuries have severe impacts on Jr. High, high school and college athletes.  The impact is especially impactful to professional athletes.

Professional teams have a major goal.  To win.  Like it or not an injured athlete is not part of the winning strategy when on the sidelines.  Another player steps in and the game goes on.

A lack of connection to a team or organization leaves many athletes feeing anxious and depressed.  I have heard many athletes say that the loneliest place in the world is on the sidelines watching the game after being injured.

There can also be financial or contractual issue to face when injured. I have worked with professional athletes on a one year contract or in the last year of their contract when they suffer a devastating injury. The fear, anxiety, and uncertainty these athletes experience can be overwhelming for some. Many athletes are waived and are left to try and get on with another team.  Many never make it back to playing at the level they played before being injured even though they have been cleared to play physically.

Many athletes have to deal with the fear and anxiety that comes with returning to play after being injured.  Advances in surgical procedures, improved skills of physicians, advances in treatment and physical therapy all help athletes return to play faster than ever before.

Coming back faster comes with the expectation that an athlete will be ready to play at a high level once released.  These athletes have been cleared as physically “100%” ready to play. This definition does not take into account the mental and emotional readiness of the athlete upon return to play.

An obvious key to a successful comeback for an athlete is to address the physical stress and trauma associated with the injury itself.  It is time to take this process further.  Addressing the mental and emotional stress and trauma the athlete suffers and endures from the time of the injury, throughout the pre-surgery, post-surgery, and recovery process, and as they prepare to return to play is a new paradigm to consider.  Expanding the “100%” definition of readiness will insure that an athlete is truly ready to play again.

Athletes return to play with more confidence, less fear and anxiety, and experience more trust in their injured or affected area of the body.  The fear of re-injury is diminished.  In most instances entirely.

The methodologies, treatment protocols, and technologies to treat this aspect of injuries are in place now.   With the increase in serious injuries in the NFL and all sports in general it is time to integrate this new paradigm in the treatment of athletic injuries. Athletes return to play physically, mentally, and emotionally ready to go. They are truly “100%” ready to play. 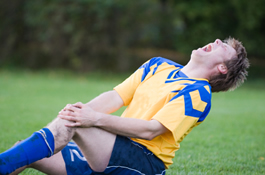 For many athletes coming back from a serious sports related injury is a terrifying ordeal. They have been cleared to play physically, but their fear of suffering another injury can be debilitating. These fears can cause complications with their return to play. Many suffer from confusion, anxiety, anger, shame and guilt. If they have been cleared to play then why do they feel so bad? Many feel that something is wrong with them if they can’t come back confident and in a good frame of mind.