My work in the world of sports performance is very rewarding and exciting. I am blessed to work with some of the best athletes in the country. I am fortunate to see them achieve tremendous highs in their careers as athletes. Unfortunately I see many of them after they have experienced devastating lows. These lows come from poor performances, or in some cases a serious sports related injury. Some of the time I see an athlete after they have suffered an injury, but often I am present when an athlete is injured. Through my trained eye I can see the impact of the injury on the athlete, and the athletes system.

A sports related injury happens to the athlete, but impacts many others in this system. By system I mean the support team of the athlete. Parents, grandparents, siblings, teammates, coaches, trainers, instructors, teachers, and friends are all profoundly affected by the injury. 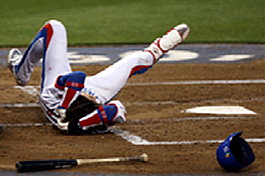 I was at a baseball game a few weeks ago and a player was hit in the head with a fastball. He went down hard. When the pitch hit him there was a collective moan from the crowd. In an instant his coaches and trainers were around him. When they got to him he was in pretty bad shape. Most of the crowd was on their feet watching. Many had their hands on their heads hoping he was all right. His teammates gathered outside the dugout, held hands and prayed. The opposing team gathered around the pitchers mound and consoled the pitcher.

He was very upset. The batter lay motionless on home plate for about 5 minutes. When his legs began to move people began to chatter quietly. He was carted off the field on a stretcher and taken by ambulance to the emergency room. There was a loud ovation from the crowd and after the ambulance drove off play was resumed. The pitcher took a new ball from the catcher, everyone sat down again, and play resumed. Or so we think.

When something like this happens it is like taking a huge stone and throwing it into a calm pond. When the stone hits the water it makes a big splash. The waves from this splash work their way around the pond until they reach the shore. The waves continue to rock the pond until their energy is absorbed by the shore.

With a serious sports related injury the waves affect everyone in the athletes life. Imagine what it must be like for the parent of the player who was hit to see their son face down in the dirt after being hit in the head with a 90 mph fast ball. First there is the waiting, the silence, more waiting and then a transport to the hospital. Teammates, coaches, friends, girlfriends, trainers, even the opposing pitcher are all suffer the same intense reaction to the injury.

For many the waves in the pond never calm down. They keep on rocking the once still waters, the inner world of the athlete, and those in the athletes system. In one minute the athlete is strong, powerful, prepared, and the next they are on the ground wondering if they are going to live, much less play baseball again. These waves reverberate within the family members, friends, and teammates too.

I feel fortunate when I am able to treat an athlete who has suffered this type of injury. They recover and put the injury behind them. They regain confidence, return to a high level of play, and in the process of recovery become wiser, and more mature.

Parents and others in the system are profoundly affected by these types of injuries. When they sit in the stands for the

first time and watch their son or daughter get back in the batters box they are a nervous wreck. Parents have reported experiencing sweaty palms, elevated heart rates, and high levels of anxiety.

I worked with a quarterback who suffered a serious concussion. I was talking with his father minutes before his sons first game back. His father said that he had talked with the coach and that they were going to start him off very slowly with a simple play book for that game. I asked him why? He said he was still coming along and needed to come back slowly. I looked him right in the eye and said “Your son is fine now and will play a great game. Whatever is going on with you about his injury is yours to deal with now.” After a pause he said “your right, I am terrified he is going to get hurt again.”

This is a very normal response for the parent of an injured athlete. After an injury parents usually treat their injured athlete differently. They might be overly concerned, watchful, and protective. Once an athlete has returned to play and parents continue to treat them this way it can have a very negative impact on the athlete. It serves as a constant reminder that they have been injured. Nothing is spoken, but the athlete senses the tension, fear, and anxiety that is humming inside of their parents. They unconsciously feel this when they are competing.

When parents come in to see me after their son or daughter is injured it is a very powerful experience for them. To download the horrific images they carry, and rid themselves of the fear, anxiety, and trauma that lingers is transformational for them.

They are able to sit in the stands and enjoy the game and watch their athlete play at a high level again. The waves in the pond have calmed down and they are at peace.

Next time you are at a sporting event and see an injury take place look at the situation through this lens of perception. The impact on the system is profound.