Great article in Texas Monthly Magazine about Simone Biles, her amazing parents Ron and Nellie Biles, her world class coach Aimme Boorman, and the work Simone and I have done over the last three and a half years to help her prepare mentally and emotionally for 2016 Olympic Games in Rio. 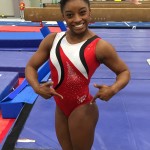 Early on a gray morning in April, dozens of elite athletes—rangy pole vaulters, wrestlers with bulbous ears, beach volleyball players with baked-in tans—hugged themselves for warmth on the windswept plaza outside the Today Show studio, in New York’s Rockefeller Center. In exactly a hundred days, they would march into Rio de Janeiro’s Maracanã Stadium as part of the opening ceremony of the 2016 Summer Olympics. But on this chilly morning, as they waited to appear on live television, the beaches of Brazil seemed a long way off.

“I guess this isn’t Rio,” joked a middle-aged spectator wearing a vest festooned with hundreds of commemorative pins from previous Olympics. Several of the athletes shot glares in his direction.

Meanwhile, the biggest stars from the most popular summer sports were standing apart from the other athletes on a sand volleyball court that had been set up for the occasion. Eleven-time Olympic medalist Ryan Lochte, the swimmer whose rivalry with Michael Phelps in the 2012 London Olympics electrified audiences, chatted with Gabby Douglas, the peppy gymnast who led the 2012 women’s gymnastics team, nicknamed the Fierce Five*, to gold.  Read more